It is early June, the morning sun greets us with a smile, and at the time the Arctic Face truck stops at the parking lot only silence reigns. But the sound waves get stronger as we walk closer and soon a rumbling din fills our ears. It is the thunderous voice of the waterfall Dettifoss in the north of Iceland, screaming out a colossal and indecipherable song ad infinitum.

Untamed vigor and intensity
I fasten my grip on my son‘s small hand and take a step away from the edge. The earth trembles under our feet.The noise drowns out the human voice and all other sounds.The force is so immense that one can‘t help feeling a knot in the stomach.
Contrary to Niagara Falls no one in Iceland has had the foolish notion of going down Dettifoss in a barrel as a publicity stunt or proof of courage – not that going over Niagara Falls is exactly the brightest of ideas. Dettifoss is the largest waterfall in Iceland in terms of volume discharge and one of the most powerful waterfalls in the whole of Europe. It is the centre fall in an astonishing series of waterfalls; about one kilometre up the river is Selfoss and two kilometres down the river is Hafragilsfoss. If Dettifoss were human, it would be a paragon of masculinity, the strongman in the club of cataracts. Perhaps it’s not the king of beauty, but what it might lack in aesthetics, it compensates for with its untamed vigour and intensity. The glacial river cascades grey-brown, frothy and plunges close to 45 meters into the gorge below. No imaginable power seems able to halt it. 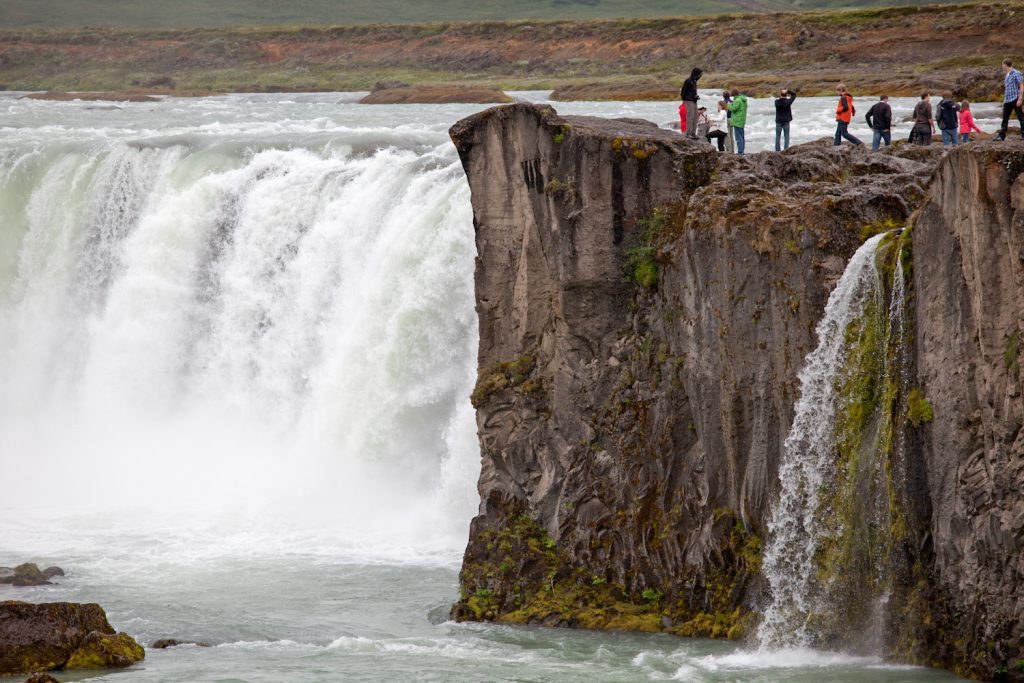 “By setting shafts of strength upon thy bow”
Nevertheless, some have desired to. In the beginning of the 20th century the Icelandic poet and entrepreneur Einar Benediktsson aspired to harness the power of the waterfall to light up the farms and industrialize a country characterized by a stagnant agricultural economy at that time. Fortunately, his dreams of building a hydroelectric power plant there (as well as damming some of the other most beautiful waterfalls in the country) never became a reality. And hopefully, they will not be exploited in the future (the area was declared a national monument in 1996). Benediktsson also wrote a dramatic poem about utilizing the energy of Dettifoss (“Our land and folk in wealth could surely grow/By setting shafts of strength upon thy bow.”) – and it is actually quite amusing that for decades almost every Icelandic poet or wannabe poet that visited the site felt the urge to compose some sublime ode to its magnificence. There are numerous poems about Dettifoss, most of them blissfully forgotten.

Gargantuan in every way
Dettifoss surges over the precipice into a narrow ravine in one magnificent stream at the time of a spring freshet but slightly divided at other times when there is less water in the river, since a couple of rocks rise from the centre of the brink. The gargantuan strength of the flow makes the cliffs shake and shiver and at the bottom of the abyss water shoots upwards. Down there the water resembles thick smoke and countless sparkling rainbows flicker in the torrent of white foam and spray. The water has carved wondrous images in the surrounding cliffs. It’s not surprising that the waterfall is featured in the opening scene of Ridley Scott‘s science fiction film Prometheus, standing in “as landscape on a primordial Earth-like planet.” No need for computer-generated imagery when Dettifoss is involved. It is one of nature‘s splendid tours de force.