Space and solitude is what strikes you once you leave the road services in Borganes, once a centre for trade in the Borgarfjörður area in West Iceland and now a small residential town dating back to the late 19th century.

Hvalfjördur is a stunning fjord that cuts into the land from Faxaflói bay.

There are many gems in West Iceland, and your Arctic Face guide will drive you in comfort to any beauty spot or attraction you like :

Deildartunguhver Thermal Spring, Europe’s most powerful. It provides 180 l/sec of 100°C hot water and when it reaches Akranes 64km away, the water is still is about 78 – 80 degrees hot. Great news for a lover of long hot showers like me. 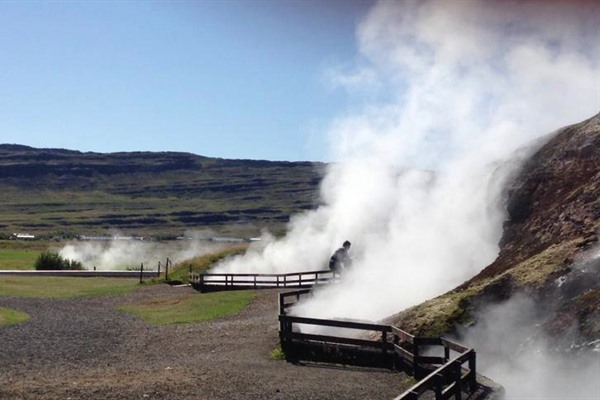 Reykholt. A little town of Reykholt – and probably Iceland’s most notable historic site – is famous for being the home of Iceland’s renowned 13th century author Snorri Sturluson, He even had a geothermally heated pool named after him. Snorralaug, dating back to Iceland’s medieval period, was connected by a tunnel to his house and Snorrastofa is a cultural centre and institute for research in medieval studies. A local church holds music recitals. I would not want to leave!

Hraunfossar waterfalls are a proof that small can be really beautiful. Just like this series of stunning waterfalls that flow from under the edge of a lava field that formed when a volcano erupted under the Langjökull glacier. Upriver is another waterfall Barnafoss, or Children’s Waterfall. It is called that because of an ancient saga telling a story of two local children probably drowning in the river near the waterfall.

A local guide describes Húsafell as a hiker’s dream. The walking paths take you through dense (at least, for Iceland) woods, lava fields, mountain springs, hot water springs, ravines, glaciers and glacial rivers. The area is popular with cyclists, horse riders and birdwatchers.

Víðgelmir lava cave may have yielded bones and jewellery from the Viking age to visiting archaeologists but it is also renowned for being one of the largest lava caves in the world. A guided tour takes explorers into the deep where ice formations and lava stalactites and stalagmites reveal themselves in all their glory.

Borg á Mýrum is a farm northwest of Borganes. It has a large rock you can climb for all-around views and a small cemetery features an ancient gravestone marked by runes.
Eldborg crater is easy to visit.  It rises 60m above the surrounding lava fields and measures 200 m in diameter and 50 m deep. It is a stunner.

So if in doubt regarding what to see and do during your time in Iceland, go West!

Svetlana was born in Moscow, where as many as nine million people use the metro every day. After 12 years in London she moved to Reykjavik for love. Svetlana loves cities and reading long articles in The New Yorker.