Unspoilt, otherworldly, stunning, ‘a must do in Iceland’ are just a few descriptions travellers use to talk about Landmannalaugar, an area in the highlands of Iceland, at the edge of the rhyolite Laugahraun lava field. You can reach it and come back in a day, but its tourism season is short. The area, which is open to harsh winds and sometimes does not see sunshine for days, is only accessible from June to September making this the ultimate super jeep tour.

Once you leave Reykjavik, a scenic drive takes you across the countryside of south Iceland. Most travellers enter the highlands area through the Thjorsardalur Valley, a spot of beauty in its own right. Scan the terrain, and what can you see? One of Iceland’s best known volcanoes, Hekla, is there, in its rumbling glory. During the Middle Ages, its frequent eruptions have earned it the name of ‘gateway to hell’. As the Wikipedia will helpfully tell you, Hekla is one of Iceland’s active volcanoes, with over 20 eruptions occurring in and around it since 874. And if you really want to know, the volcano blew off its top as recently as 2000. 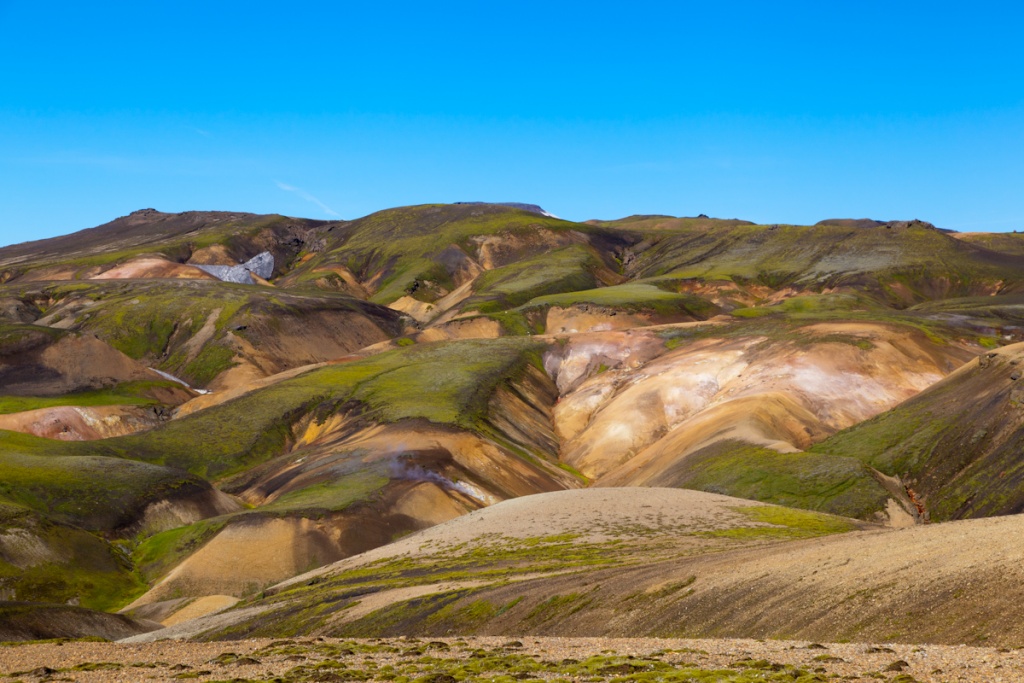 As impressive as Hekla is, save some space in your camera for the multicoloured rhyolite mountains of Landmannalaugar known for dramatic lighting and array of colours, including yellow, pink, fluorescent green and purple, brown, black and white. The land, formed by volcanoes and geothermal activity, is plentiful in natural hot and cold springs (this means outdoor bathing, more about this later). At the same time, heat coming to the surface from the depth of the earth causes colour variations in the minerals, from yellow and red to green and blue, to name a few.

Add to this the remoteness, the wilderness, the tranquillity plus a few river crossings, and this journey will surely become an experience one is unlikely to forget. Hikers will love one of several shorter hikes amid this stunning scenery – spectacular views of old lava fields, inactive explosion craters, and waterfalls are just some of the highlights.

But perhaps the biggest highlight of all will be a dip in a natural hot pool under the open skies (Landmannalaugar is translated from the Icelandic as ‘the people’s pools’). So take off your hiking gear, slip into a bikini and lower your body into the warm water. You are likely to be surrounded by the river banks covered with melting ice and snow at the same time, and in that perfect spot and perfect moment you will experience firsthand why Iceland is called the land of fire and ice.

Makes the whole trip worth it, doesn’t it?