The Reykjanes peninsula is often overlooked by those living in the metropolitan area of the capital, perhaps because the distance from Reykjavik to there is relatively short. A thing can sometimes be too close to be seen. At Reykjanes the Mid-Atlantic Ridge comes ashore; believe it or not, it is literally possible to see the Mid-Atlantic Ridge rise out of the sea. This makes it one of the only places on earth where it is visible. The Leif the Lucky Bridge (or the Bridge Between Continents) spans the Álfagjá rift near the quiet fishing town Grindavik, which marks the boundary of the Eurasian and North American continental tectonic plates. It was built in 2002 and named in honor of Icelandic explorer Leif Eriksson who sailed from Europe to the continent that was later named America, 500 years before Columbus did the trip.
A brilliant showcase of geology. 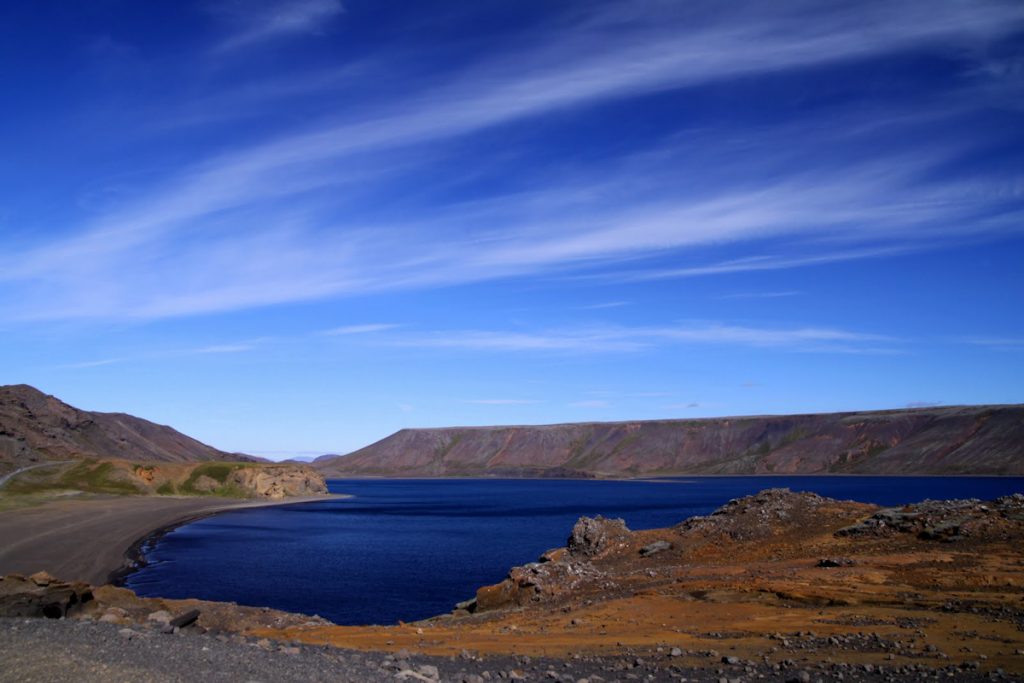 The peninsula has a great wealth of natural wonders, especially those that are connected to volcanic activity. The beauty of nature there is admittedly not the most delicate and verdant imaginable, on the contrary, but the area turns out to be both magnificent and diverse when explored ; a seasoned guide is recommended to make the experience more fruitful.

The mountains there may are not among the highest in Iceland but they are characterized by variety and rugged beauty, surrounded by strange weathered rock formations, gravel, boulders and rubbly tracks. The most remarkable sights are the small shield volcanoes and fields of dark and desolated lava with loose, broken and sharp surface, making hiking through it difficult and slow. The mountains are a world of their own and many of those that praise Reykjanes the most think the lava contains some of the strangest and most marvelous spots in the country. It is not very hospitable at first glance, and its craggy face might frighten the apprehensive ones away, but the lava has plenty of magic to share with a visitor. In many ways it is also like a active showcase for the development of Iceland‘s geology through centuries and millenniums and reveals how Mother Nature is constantly nurturing and planting, slowly but surely dressing naked and hard shields of lava into fur-coats of green moss and delicate flowers. As soon as the scorching magma is solidified into lava, vegetation starts its endless work.

A lake cryptid bathing in the sun.

The lake Kleifarvatn is one of the places on Reykjanes worth visiting. Once upon a time people believed that a lake cryptid lived in Kleifarvatn, very fierce and maybe not a distant relative of the Lagarfljót worm, a serpentine creature supposed to live in a lake in the East of Iceland. The 18th century writer and explorer Eggert Ólafsson met a man that claimed he had seen some peculiar beast swim in the lake. In shape and color it was similar to the Arctic skate but many times larger, indeed huge, about the size of a whale.

People were convinced that the lake was crowded with trout but no one dared fishing in it because of the horrible monster lurking beneath the surface. When this mega-fauna surfaced it stayed there up to two minutes and a newlywed couple had even seen it crawl up on a rock to enjoy the warm rays of the sun, a vision that scared the living daylights out of the pair.

Alas, this aquatic being has avoided the limelight in recent centuries. Other wise it would draw countless spectators to this deep, somewhat gloomy lake with black-sand shores.

At the height of the Cold War, in the early 1970s, something was found in it though, but from a less mystical origin. Young brothers diving in the lake discovered a suitcase there packed with equipment and more devices scattered a round on the bottom of the lake. All these gadgets and gizmos had Cyrillic symbols on them; most of them obsolete listening devices. These apparatuses were thought to prove beyond doubt that communication in Iceland was being monitored on a large scale, particularly eavesdropping on conversations going through the main telephone exchange in the center of Reykjavik at that time. But maybe the listeners were only looking for a mythical monster to lighten up their bleak Cold War existence. Who can blame them!