In a typical overstatement, Icelanders will tell you that in the last couple of decades Iceland has become the whale-watching centre of Europe. Catching a whale watching tour here is easy, as long as the unpredictable and untamed North Atlantic Ocean allows you to safely take to its waters.

Whales in Iceland are not just a gimmick to make money from tourists. Many Icelandic sagas tell tales of kings and commoners encountering the majestic creatures. Probably the most famous whale of them wall is Keiko, the killer whale who starred as Willy in the 1993 Hollywood blockbuster Free Willy. The two-year-old male specimen was captured in the Reyðarfjörður fjord in east Iceland in 1979 and sold abroad before being cast in the film. 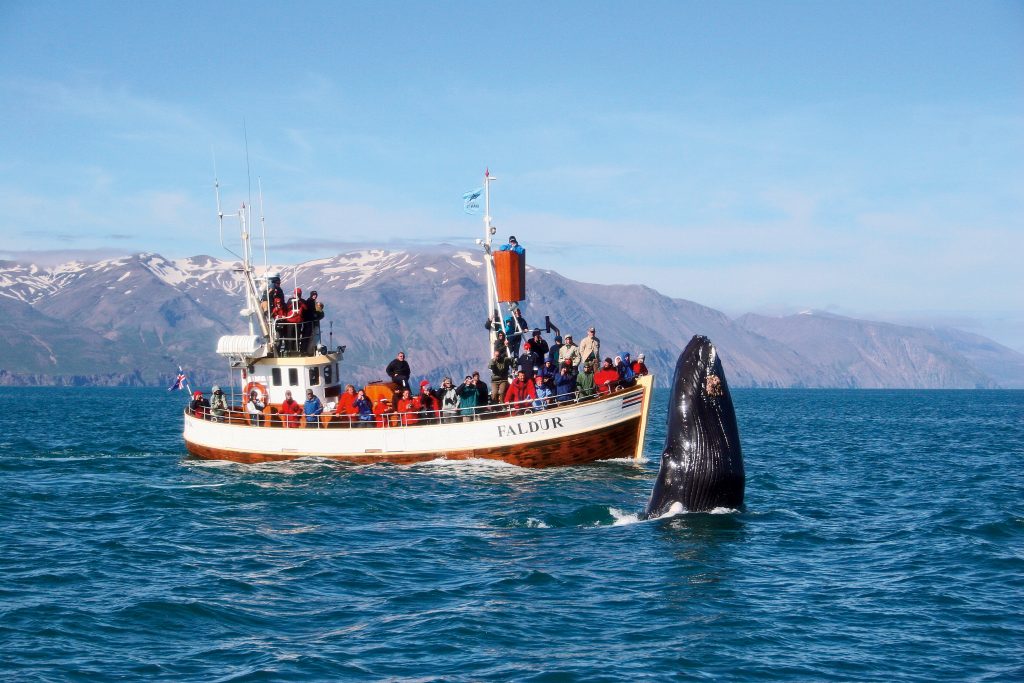 While there are plenty of such tours leaving from the Reykjavik harbour, consider getting on a tour boat in Húsavík, a small town of about 2,000 inhabitants on the north coast of Iceland, also known as the ‘Whale Capital of Iceland’. Apparently, there is a higher chance of seeing whales in Húsavík than any other place in Iceland. There, the setting for the tour could not be more stunning. Sheltered by the stunning mountains of Vík, lays the Skjálfandi Bay. As a renovated traditional oak fishing boat cuts through the waves, watch out for humpback whales, minke whales, blue whales and white-beaked dolphins. May to November is the best time to catch a sight of them. If you are lucky, you might get to see the whales feeding, jumping out, whacking their flippers against the water or raising their head out of the ocean to check out the surroundings.  It is any traveller’s dream to capture a quality photo of the magnificent creature. Thankfully, you don’t need a big lens to get a lovely shot of, say, the blue whale, a frequent visitor to the bay and, incidentally, the largest known animal ever to have existed on the planet (according to the National Geographic, these marine mammals reach up to 100 feet, or 30.5 meters long, and upwards of 200 tons. Their tongues alone can weigh as much as an elephant.  A small zoom or even a 50mm camera lens is sufficient.

Don’t let rain stop you: warm coats and overalls will be provided, and a traditional Icelandic twisted donut called “kleina” will go down well with a cup of hot chocolate during the tour which typically lasts about three hours. Sounds like a whale of a time, wouldn’t you agree?